Detials and Full Text of Sugauli Treaty in English is below . Know each points

What is Sugauli Treaty?

The British East India Company had come to rule much of north India by the time the Gurkhas attacked kingdoms in South Asia. The Company became the de facto ruler of South Asia east of Satluj river in place of the Moghuls, Marathas and other kings, especially after defeating the Marathas in 1803 in Second Anglo-Maratha War. After firmly establishing its rule over Delhi in 1803, the Company attacked the Gorkhas and repulsed them from Kumaon Kingdom and the Garhwal Kingdom in the area west of the Kali river and in Sikkim and North Bengal east of Teesta river by 1815. 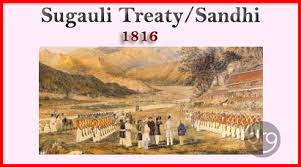 The British troop deployed in Morang, Bara & Parsha had to embrace defeat. Then the British troops attacked Jiatgargh fort in Butwal but it was defeated by Nepalis troops. Therefore, they could not dare to attack Palpa. In 1814, British General Gillespie was forced to flee from Nalapani.  The Gorkhas were forced to accept a peace treaty with the British (the Sugauli Treaty) in 1816.
However, later Nepali troops led by Balbhadra had to return from Nalapani due to the internal political crisis of Nepal that resulted in the treaty of Sugauli.
Full Text of Sugauli Treaty is all follows :

The text below is from the initially proposed treaty that was delivered on March 4th 1816 to Nepal Darbar:
Treaty of Peace between the Honourable East India Company and Maha Rajah Bikram Sah, Rajah of Nipal, settled between Lieutenant-Colonel Bradshaw on the part of the Honourable Company, in virtue of the full powers vested in him by His Excellence the Right Honourable Francis Earl of Moira Knight of the Most Noble Order of the Garter, one of His Majesty’s Most Honourable Privy Council, appointed by the Court of Directors of the said Honourable Company to direct and control all affairs in the East Indies, and by Sree Gooroo Gujraj Misser and Chunder Seeker Opedeea on the part of Maha Rajah Girmaun Jode Bikran Sah Bahadur, Shumsheer Jung, in virtue of the powers to that effect vested in them by the said Rajah of Nipal, 2nd December 1815.
Whereas war has arisen between the Honourable East India Company and the Rajah of Nipal, and whereas the parties are mutually disposed to restore the relations of peace and amity which, previously to the occurrence of the late differences, had long subsisted between the two States, the following terms of peace have been agreed upon:

There shall be perpetual peace and friendship between the Honourable East India Company and the King of Nepal.

The Rajah of Nipal renounces all claim to the lands which were the subject of discussion between the two States before the war, and acknowledges the right of the Honourable Company to the sovereignty of those lands.

The Rajah of Nipal hereby cedes to the Honourable the East India Company in perpetuity all the under-mentioned territories, viz-
First: – The whole of the lowlands between the Rivers Kali and Rapti.
Secondly: – The whole of the low lands (with the exception of Bootwul Khass) lying between the Rapti and the Gunduck.
Third:– The whole of the lowlands between the Gunduck and Coosah, in which the authority of the British Government has been introduced, or is in actual course of introduction.
Fourth:– All the low lands between the Rivers Mitchee and the Teestah.
Fifth:– All the territories within the hills eastward of the River Mitchee including the fort and lands of Nagree and the Pass of Nagarcote leading from Morung into the hills, together with the territory lying between that pass and nagerr. The aforesaid territory shall be evacuated by the Gurkha troops within forty days from this date.

With a view to indemnify the Chiefs and Barahdars of the State of Nipal, whose interests will suffer by the alienation of the lands ceded by the foregoing Article, the British Government agrees to settle pensions to the aggregate amount of two lakhs of rupees per annum on such Chiefs as may be selected by the Rajah of Nipal, and in the proportions which the Rajah may fix. As soon as the selection is made, Sunnuds shall be granted under the seal and signature of the Governor General for the pensions respectively.

The Rajah of Nipal renounces for himself, his heirs, and successors, all claim to or connextion with the countries lying to the west of the River Kali and engages never to have any concern with those countries or the inhabitants there of.

The Rajah of Nipal hereby engages never to take of retain in his service any British subject, nor the subject of any European or American State, without the consent of the British Government.

In order to secure and improve the relations of amity and peace hereby established between the two States, it is agreed that accredited Ministers from each shall reside at the Court of the other.

This treaty, consisting of nine Articles, shall be ratified by the Rajah of Nipal within fifteen days from this date, and the ratification shall be delivered to Lieutenant-Colonel Bradshaw, who engages to obtain and deliver the ratification of the Governor-General within twenty days, or sooner, if practicable. Done at Segowlee, on the 2nd day of December 1815. PARIS BRADSHAW, Lt. Col., P.A. Received this treaty from Chunder Seekur Opedeea, Agent on the part of the Rajah Nipal, in the valley of Muckwaunpoor, at half-past two o’clock p.m. on the 4th of March 1816, and delivered to him the Counterpart Treaty on behalf of the British Government.