What is locust and Where It came from ?

History of locus and its Attack

The locust attack is not just a new problem, they are already mentioned in the ancient Egyptians carved them on their tombs and the insect is mentioned in the Iliad, the Bible, and also in the Quran.
These insects generally have a solitary and gregarious phase. Locust which attack the Agriculture crops are by gregarious phase which is nothing but the swarming millions of them at a time.
The Desert locust
Its scientific name is Schistocerca gregaria is the know species owing to wild distribution especially in North Africa, Middle East, Indian subcontinent.
One group of Desert Locust can cover about 250 square miles which is about 648 square km. This one group or swarm of locust can contain more than  400 tons of weight .these locust can eat lots of food plants. They can fly over 7000 ft with a speed of 20 to 24 k.m per hour. They have the ability to migrate over the long kilometers of Distance with a short period of time.
Usually, the young grasshopper or baby grasshopper is called a nymph. It can’t fly during the initial stages it can only able to jump from one place to another. Their wings are short. They jump and enter into the Agriculture lands and eat the crops and develop themselves .usually they eat equally to their body weight.  And grasshopper yield egg pod .which contains 15 to 150 eggs.
During the time of spring and initial stages of summer, they hatch the egg, and all the grasshopper are combined together and forms as a swarm. The locust travel in the direction of the wind.

Can locust come to Nepal?

Though it has started in Africa, it has come through different parts of  Iran, Pakistan, and India, it has been assumed that Nepal could be the next attack…There is a high chance to come to Nepal as it has already been attacking to neighboring countries like Pakistan and India.as it is seeking to India, Nepal is not so much far enough to get into. 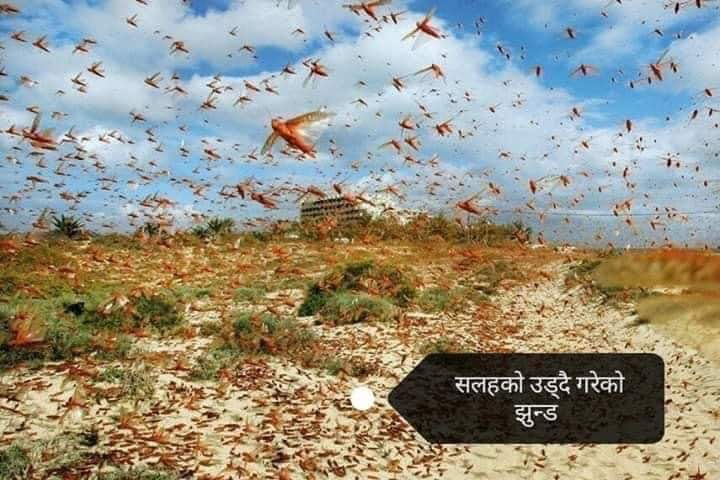 If these swarm of locust hit Nepal, then it will damage the growing crops in different parts of Nepal. Which can bring food crisis over here? Due to lockdown, there has been already a problem to the daily life of people of Nepal, if a locust attack then it can be more disastrous to the Neal on its food economy.
so, Nepal should be aways ready for controlling or preventing from this devastating conditions.  According to the news, Nepal has already made a committee for taking prevention from it.  Below are some measures that can be taken as preventive measures.

How to prevent locust?

We discuss here how to prevent this insect. and save crops
So. In conclusion, Nepal can be the next destination for locust attack. We need to be aware and be prepared for it…