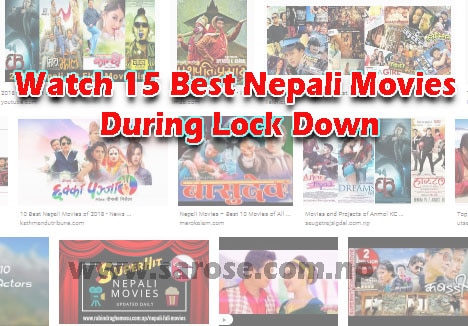 Watch 15 Best Nepali Movies during Lockdown are the movies for your time pass. We all know that we are on complete lockdown to have a war against the covid 19 pandemics.

To keep social distance quarantine is the main thing for the prevention. So, for making good use of time during this lockdown you can select some best old Nepali movies. They are a good entertainer and enjoyable.

So, here I have listed some 15  Best Nepali movies for watching during the lockdown period. This is a list of old and new movies .. you can comment with some of your suggestions

Watch 15 Best Nepali Movies during Lockdown from the List Below

Balidan is one of the revolutionary movies which is always best all the time. This movie is based on the people’s revolutionary movement for democracy. The story of democratic fighters made it different from most of the other Nepali movies.

Pasupati Prasad movie is a unique type of movie which features the struggle of a poor guy. He comes to Kathmandu to earn his living and pay off the debt owed by his late father. This film was also nominated for the Nepali entry for the Best Foreign Language Film at the 89th Academy Awards.

‘Dreams’ is the Best Nepali Movies by Bhuwan K.C . starring Anmol K.C, Samragyee Rajya Laxmi Shah Producer: Bhuwan K.C. DR.Kapil Rijal, Bhanu Phuyel, Satyanarayan Keyal. The main synopses of the movie are ” Aveer”, in his childhood loses his father to an accident which he claims he had seen in a dream. A grown-up Aveer sees a dream where his love, Kavya dies in a car accident and tries everything to let this dream not come true.”.

Loot 1 and Loot 2 is a Nepali crime thriller movie written and directed by Nischal Basnet. One of the popular actor Dayahang rai group plots to rob a bank. Loot 1 sequele which is Loot 2 was released in 2071

Dakshina is a 1993 movie directed by Tulsi Ghimire. This was one of the superhit Nepali movies stars with  Tulsi Ghimire, Bhuwan K.C., and Niruta Singh.

The main story of this Best Nepali Movies is “A teacher who is against student politics on campus gets demoted as a primary teacher in a rural village for being an obstacle to a politician. Since then he starts a new life in a village running a school which has not been in good condition for years.”

Jatra is a very good movie with action, comedy, and drama. Jatra tells the story of three people who have lots of problems as they do not have money. The story revolves around Rs 30 million being robbed from a bank. The movie revolves around various ideas they implement to protect the money from bank robbers with a dream of a better future. A sequel was released in 2019.

Director/ Writer of the  move is Pradeep Bhattarai

One of the most successful and one of the  Best Nepali Movies in Nepal is a love story of two college friends: Amar (Udit Narayan) and Suniti (Tripti Nadakar). It also features Arjun (Bhuwan K.C.) as a lover of Suniti. The film depicts the disparity between rich and poor people. The Indian comedian Hum Jayega has a short appearance. It was the highest-grossing movie of the time.

The Legacy of eternal love story “Kusume Rumal” is created forward by Sunidhi’s daughter Kusum, in Naya Kusume Rumal. Kusum’s beauty is defined by her simplicity, innocence, and decency, yet her character portrays immense strength, dignity, and passion.

She falls in love with her neighbor Sohan, a flirt and a reckless biker who believes in living life at the moment. totally in love with each other and on cloud 9, everything seems fine until suddenly a dark reality indicates their departure. Will they be able to overcome it or is Kusume Rumal really a tragic ending.

It is a comedy movie. Dui Rupaiya is all about two friends searching for a two-rupee note which they lost on their way. Two best friends who lost the transaction slip ( Rs 2 note ) are struggling to find the note. The film entails their quest to find that Rs 2 and save their necks, all the while saving themselves from local thugs, police, and their boss as well.

Darpan Chaya is a 2001 Nepalese romantic drama film, written and directed by Tulsi Ghimire which is one of the evergreen and Best Nepali Movies

It is one of the best hit Movies by Kiran Kc which is presented by Maha Sanchar. The movie is starred Dipak Raj Giri, Deepa Shree Niraula, Haribansha Acharya, Madan Krishan Shrestha, Paul Shah, Aanchal Sharma

This social movie became successful in setting alternative trends in the Nepali cinema industry. As suggested by the title, it features a game played between a local tough guy, Kaazi, and an outsider, Bibek, to win over a girl: Maiyaa.

The director/ Writer of this Best Nepali Movies  is Ram Babu Gurung while   Dayahang Rai, Nischal Basnet, Rishma Gurung are major cast in the movie

During lockdown time, you can watch these Best Nepali movies and enjoy the time. Be safe from the corona.

5 Best Sanjay Dutt Movies : Must Watch Movie for all time